The Democratic National Convention meeting in Charlotte, North Carolina has adopted a platform. The old south Democrats of bygone days would be shocked by it. Not only is there no mention of God, the twin anti-biblical themes of pro-abortion and pro-homosexual marriage are prominent issues supported by the new Democrats. This serves to further widen the divide between Republicans and Democrats, and between Democrats and conservative Independents. So stark is this divide that I predict some voters will find that they choose a candidate based on these positions more that on the persons of the candidates themselves. Last Saturday in Charlotte I spoke with a Roman Catholic monk who said he did not favor either candidate. But surely these platforms will push such a voter one way or the other. 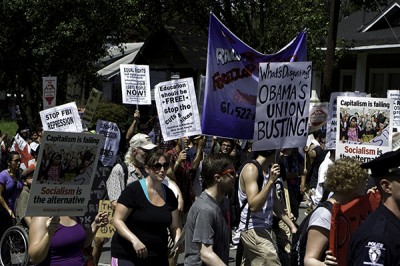 Even the protestors on Sunday afternoon were largely Democrat-leaning if one is to judge by their posters. The Coalition to March on Wall Street South walked through the streets of Charlotte under the complete charge of the police. They sang, “we are the people, we own the streets” but the streets were clearly owned by the police. Barriers kept all protestors on a specified route, and no exits were allowed. Over 80 groups were represented by the protestors, and most seemed to favor things supported in the Democratic Platform. However, they did object to the degree to which both parties are beholden to the largest corporations. This is surely the scandal that people of all parties and faiths could potentially agree upon. Money has corrupted politics. The love of money is indeed the root of all kinds of evils. On that score neither party is innocent, and neither is listening to the biblical prophets. “They rejected the law of the LORD, they did not obey his commands.” (Amos 2:4) 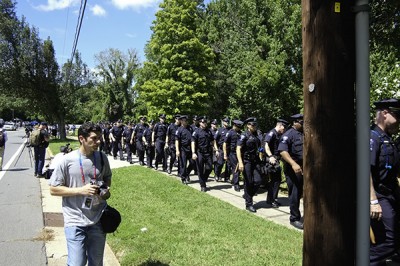 Embarrassed by the public outcry for leaving God and Jerusalem out of their platform, the Democrats backed off last night and moved to include God and Jerusalem. God must be so pleased that after three indecisive votes the moderator finally said God is back in. This decision was greeted with boos from what appeared to be half of the delegates.  Not that the Republicans are anything to brag about, for they too are in many respects charging ahead with utter disregard of God’s will. Christian voters are faced with the worst case of choosing the lesser of two evils that I have ever witnessed.

Austin Miles summarized well last night’s DNC meeting in the Christian Post:  “So let’s understand this pageant: God was mentioned and most of the audience booed. Sandra Fluke who sins against God while demanding we pay for her sins is cheered. Senate Hopeful Elizabeth Warren, a fraud and liar who pretends to be a Christian is cheered. Bill Clinton, a kinky adulterer is cheered. And God is booed? Something is wrong with this picture.” [See his whole commentary here] 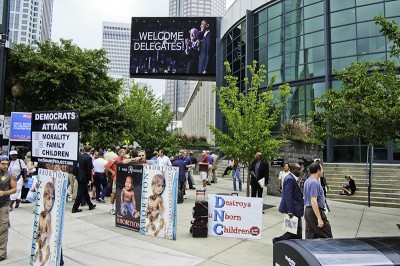 What it has been and what it should be.

Bad Behavior has blocked 38 access attempts in the last 7 days.